Tron just announced some long-awaited news, that many TRX enthusiasts were anxiously waiting to hear. 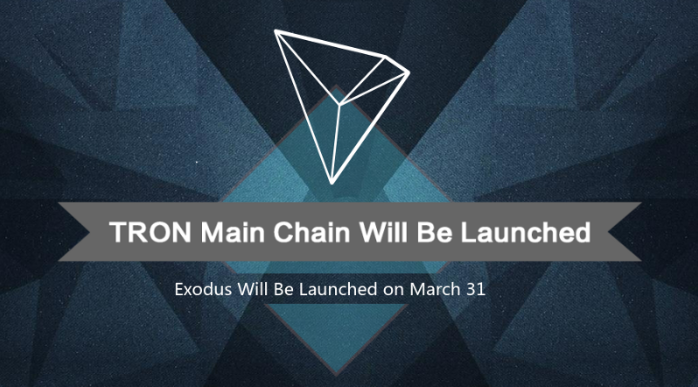 Announced by the Tron Labs on Medium, Tron’s “Exodus” will be launched on March 31st and it will show the main network functions. TRON, at its core, is a decentralized content protocol on the basis of the blockchain. Its main purpose is to establish a worldwide free content entertainment system. Every user is able to own, distribute and store data freely within its protocol.

“First, I would like to express my gratitude to all of you, for your attention and support to TRON and for your trust in our team; and to our developers as well, for their strenuous development work. With unremitting efforts of TRON’s technical team, the test for TRX main network is about to start. The launch of main net this time will be a vital node in TRON’s development history. But this won’t be an end.”

It seems the founder is changing tactics as to how new news on the project will get spread, as his previous tactics via his personal twitter gained major scrutiny. The way the Tron Foundation conducted the press release of the Exodus launch via Medium, is a positive step in the right direction. The release was filled with in-depth information for its investors and a clear timeline.

As I previously reported, Tron Dogs launched its English version midday yesterday but since, the game has been “delayed.” There is no certainty if the server was overrun with users but the website reads, “To all our respected users, we’re very sorry that the release of the English, Korean, and Japanese versions has been delayed. To produce the best experience possible, we are currently working very hard to release them before the end of the week.”  The launch yesterday made no change to TRX’s price but that was to be expected. Many users had been using the Chinese version launched earlier last month but just used google translate. Now, users across the world have access to these dogs.

On January 29th, the feature that allows you to breed Tron dogs will begin. This will enable users to make money from the game, without having to own a pet store. This is an exciting step for the game and once launched, it looks set to be monumental.

Hopefully developers can get the English, Korean and Japanese sites up and going, as many investors bought TRX specifically for this game.