Elrond (ERD) is set to begin its official transition to “eGLD” and see a drastic increase in scarcity and also in coin value. ERD holders will swap each ERD for 1,000 eGLD (1000:1 ratio). Per their official blog release:

The simple next steps

For stakers or delegators: If you have staked or delegated your ERD before the mainnet launch, your ERD has already been swapped and you have received the new eGLD.

For ERD ERC20 and BEP2 tokens held on Binance.com: If you hold ERD on Binance.com, it will automatically be swapped for eGLD on the 3rd of September, so no action is needed.

For BEP2 tokens held on Binance.org: If you hold ERD on Binance.org, you will have to manually do the swap by either (1) depositing ERD on Binance before the 30th of August, or (2) via the Elrond swap bridge at any time after the 3rd of September.

For all other wallets: if you hold ERD on Crypto.com, MetaMask, Ledger, TrustWallet, Atomic Wallet or any other wallet, you can do the swap manually in either of two ways: (1) by depositing ERD on Binance before the 30th of August, or (2) via the Elrond swap bridge starting with the 3rd of September.

No immediate swap deadline: Everyone will be able to continue to swap ERD ERC20 or ERD BEP2 to EGLD via the Elrond bridge for the next 12-24 months, so there is no risk of losing your ERD tokens if you don’t swap immediately.

Note: Please be very careful, no other swap methods exist beside Binance and the Elrond swap bridge for now. Do not trust anyone asking for your private keys or seed phrase. 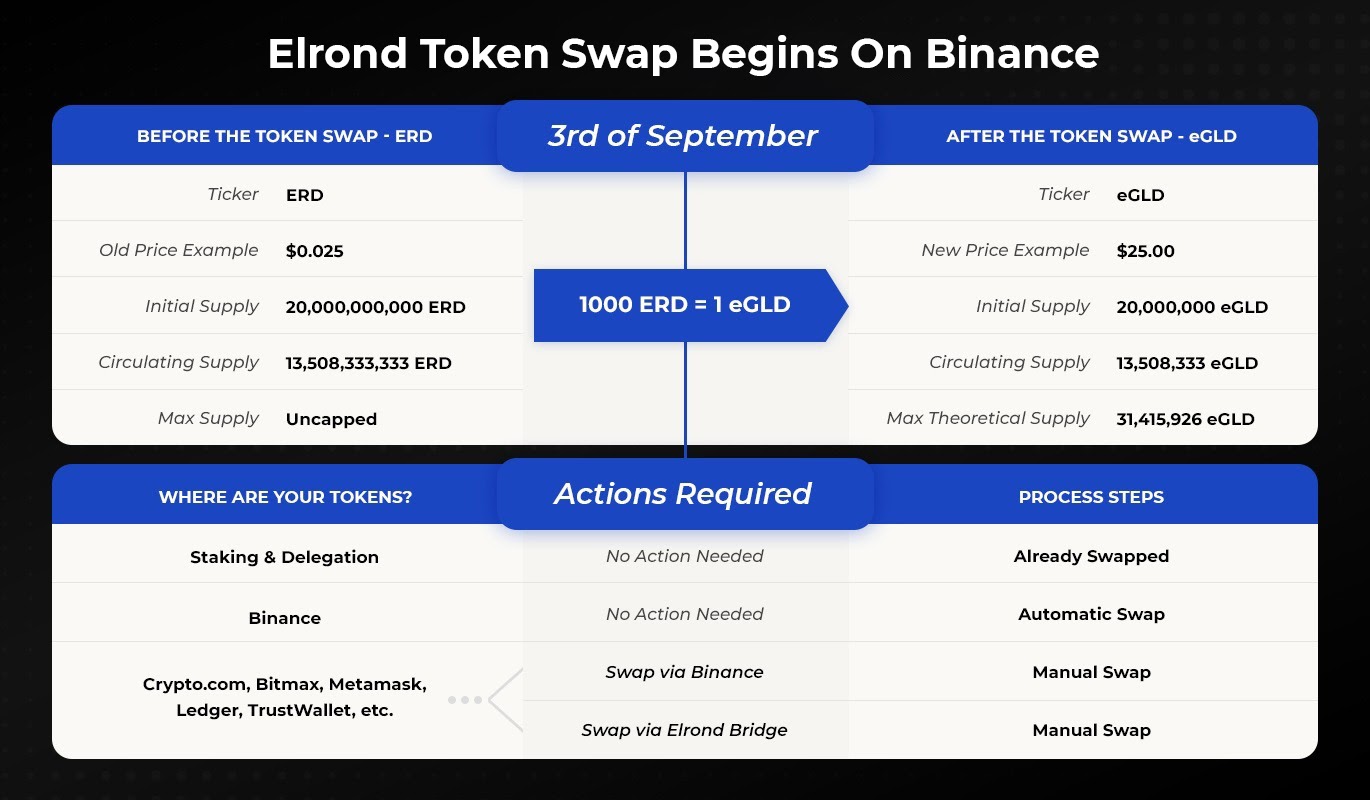 The token swap means high growth for the Elrond economy and is a natural step for enabling all the native Elrond services such as general staking and delegation, and native DeFi options. Once the swap process is complete, the Elrond economy will be set in motion, with new exchanges and integrations coming online.

Beyond the token swap, the new Elrond economic model is ready to go live.

The difference between eGold and other economic models is like the difference between a Shakespeare play and any random story. Just as there are huge implications in precise words and phrases because combined they reveal subtle and profound new meanings, so there are huge implications in precise, fine-tuned economic parameters because together they can evoke strong economic attraction forces, which can effectively reshape the global economy.

Here are its most important parameters:

1. The eGold metaphor means simplicity and universal appeal by design

Complexity is the most important obstacle for real world adoption — try explaining Bitcoin or Ethereum to normal people and you can see what I mean. To reach the next billion people, we had to completely rethink the Elrond currency, and capture its essence into a universally appealing and powerful metaphor.

There are strong staking incentives for validators to secure the Elrond network. At first, these staking incentives come from new supply issued yearly, but as adoption kicks in, inflation is substituted with transaction fees to cover the staking rewards. Furthermore, in contrast to most other blockchain networks where the new issuance is infinite and uncapped, in Elrond this sum is capped to a theoretical supply limit of 31,415,926 eGLD which can be reached over 10 years.

One of the most most powerful feature of the Elrond economic model is that each transaction fee paid reduces the theoretical limit by substituting inflation with fees, thus making eGLD more scarce, ensuring that the 31.4M theoretical supply limit will never be reached.

A snowball about to transform into an avalanche

Elrond network, Maiar and eGold are each immensely valuable separately, but when put together, they are like the pieces that formed the steam engine for the first time.

Given the fixed supply of eGold, combined with the global distribution and intuitive simplicity of Maiar, every new user joining the application will be directly reflected in the value of eGold. So the question becomes, how will eGold look with 1 Million people using Maiar? How about 10 million or 100 Million people?

Ten years ago, Bitcoin was a worthy attempt to create a digital currency, which ultimately fell short in two specific ways: limited transaction bandwidth performance, and terrible user experience. We have designed eGold to be a robust programmable store of value, built on top of the most high bandwidth blockchain architecture, and globally accessible through a simple and powerful user interface. This is native digital money taken to its natural conclusion.