The Securities and Exchange Commission has filed a lawsuit against Ripple, CEO Brad Garlinghouse and co-founder Chris Larsen for conducting what the regulator alleged to be a $1.3 billion unregistered securities sale.

Since the new broke XRP is now down 35%. A bad swing for those that rode it down but a great ride for those that shorted the market on platforms like, ByBit.

The complaint “alleges that Ripple raised funds, beginning in 2013, through the sale of digital assets known as XRP in an unregistered securities offering to investors in the U.S. and worldwide. Ripple also allegedly distributed billions of XRP in exchange for non-cash consideration, such as labor and market-making services. The complaint also makes mention that lawyers made contact around 2012 giving warning that Ripple:now XRP, could be considered an security.

The legal documents sent in 2012 warned that there was some risk that XRP would be considered an “investment contract”/security under their federal securities laws. They mentioned things such as, how  Ripple promoted & marketed XRP to purchasers, the purchaser’s motivation, and other activities of Ripple’s and XRP. If Ripple employees promoted XRP as potentially increasing in price, and If buyers purchased XRP “to engage in speculative investment trading.”

“We allege that Ripple, Larsen, and Garlinghouse failed to register their ongoing offer and sale of billions of XRP to retail investors, which deprived potential purchasers of adequate disclosures about XRP and Ripple’s business and other important long-standing protections that are fundamental to our robust public market system,” Stephanie Avakian, Director of the SEC’s Enforcement Division, said in a statement.

Garlinghouse said Ripple plans to fight the case in a series of Twitter comments yesterday. 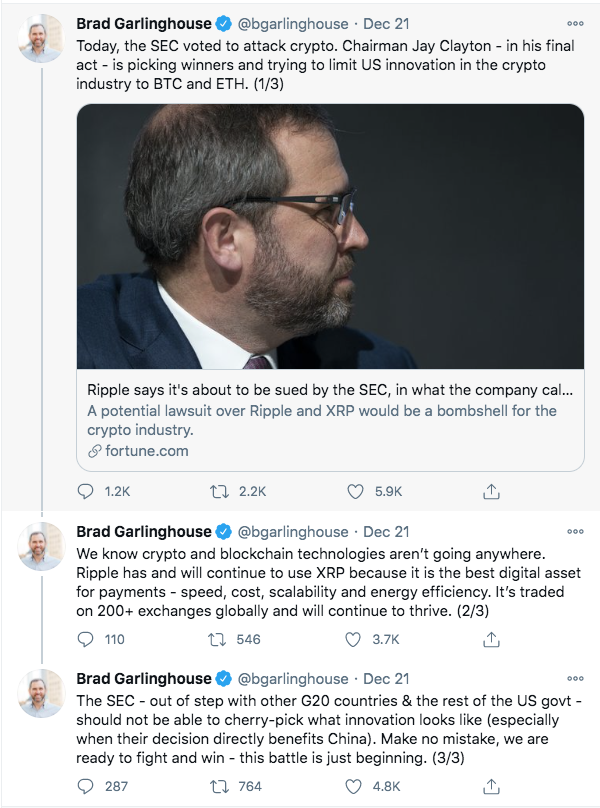 The SEC did something similar to EOS is September of 2019 and ordered the blockchain company to pay a $24 million penalty.

” According to the SEC’s order, Block.one, which has operations in Virginia and Hong Kong, conducted an ICO between June 2017 and June 2018.  The order finds that Block.one stated it would use the capital raised in the ICO for general expenses, and also to develop software and promote blockchains based on that software.  Block.one’s offer and sale of 900 million tokens began shortly before the SEC released the DAO Report of Investigation and continued for nearly a year after the report’s publication, eventually raising several billion dollars worth of digital assets globally, including a portion from US investors.  Block.one did not register its ICO as a securities offering pursuant to the federal securities laws, nor did it qualify for or seek an exemption from the registration requirements.

“A number of US investors participated in Block.one’s ICO,” said Stephanie Avakian, Co-Director of the SEC’s Division of Enforcement.  “Companies that offer or sell securities to US investors must comply with the securities laws, irrespective of the industry they operate in or the labels they place on the investment products they offer.”

Also on Oct. 21, 2020 The SEC also Obtained a final judgement against “Kik” of whom was ordered to pay a $5 million dollar fine.

“The SEC’s complaint, filed in the U.S. District Court for the Southern District of New York on June 4, 2019, alleged that Kik sold digital asset securities to U.S. investors without registering their offer and sale as required by the U.S. securities laws.  The court granted the SEC’s motion for summary judgment on September 30, 2020, finding that undisputed facts established that Kik’s sales of “Kin” tokens were sales of investment contracts, and therefore of securities, and that Kik violated the federal securities laws when it conducted an unregistered offering of securities that did not qualify for any exemption from registration requirements.  The court further found that Kik’s private and public token sales were a single integrated offering.

“Issuers seeking to use the public markets to capitalize their businesses may not evade the registration requirements of the federal securities laws,” said Kristina Littman, Chief of the SEC Enforcement Division’s Cyber Unit. “The court’s decision recognized that Kik was engaged in a single, illegal offering of securities.”

The final judgment permanently enjoins Kik from violating the registration provisions of Sections 5(a) and 5(c) of the Securities Act of 1933.  Kik is further required, for the next three years, to provide notice to the Commission before engaging in enumerated future issuances, offers, sales, and transfers of digital assets.  Kik will also pay a $5 million penalty.

Ripple and XRP will likely recover. The only way it will every realistically go to zero is if the entire world deems it useless, which it quite literally isn’t. Additionally, this lawsuit doesn’t stop others around the world from using XRP.

How long will it take seemingly depends on how fast this lawsuit can be resolved. The coin won’t disappear tomorrow, but it will have some recovering to do, especially given the amount of new investors in the market and thus a lot of “weak hands.”